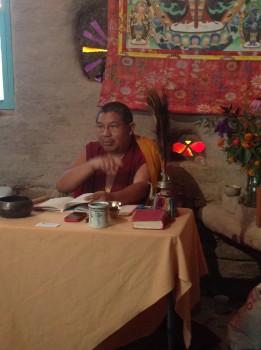 Geshe Thupten Dorjee was born Sonam Palden in Tibet just before the Chinese Communist invasion of 1959. He and his family escaped occupied Tibet and headed southward when he was three years old. The journey through the mountains to Bhutan was a long, arduous one for the family. On many cold Himalayan nights, they sought refuge in shelters created for animals. Much of Geshe’s early life was spent in a refugee camp in Bhutan with other Tibetan exiles. Unfortunately, most members of his family died while there due to the poor living conditions and lack of medical care.

After 8 years of these difficult living conditions, Geshe and his surviving family journeyed south and settled in Southern India. At the age of 13, Geshe entered Drepung Loseling Monastery in Karnataka, South India.

Over the next 22 years, Geshe made a thorough study of the vast scriptures, principally the five foremost Buddhist philosophical subjects, i.e., Pramana (Valid Cognition), Prajnaparamita (Perfection of Wisdom), Madhyamaka (Middle Way Philosophy), Vinaya (Buddhist Ethics), and Abhidharma (Buddhist Metaphysics). Geshe was ordained a Buddhist monk by His Holiness the Dalai Lama in 1986. In 1994, Geshe received the degree of Geshe Lharampa (meaning “Spiritual Guide”), the highest scholastic honor offered by a Buddhist monastic university. It is roughly equivalent to the Doctor of Philosophy, although its course of study and examination schedules are far more rigorous than the Western degree.

During his years at Drepung Loseling, Geshe taught scriptures and Tibetan grammar to the lower classes while pursuing his advanced course of study. For four years, he was supervisor of agricultural projects at the Monastery.