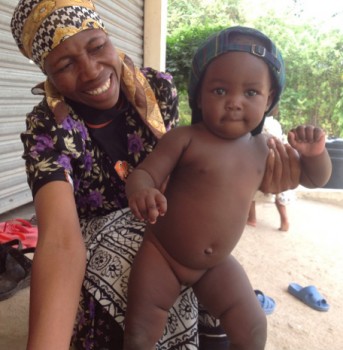 This is Marcelina. She was sent here when she was two days old, after her mother died in childbirth. She’s now one.

Zeru Zeru Simama Sasa! is the name of our website, although the Center’s actual name here in Lamadi is: 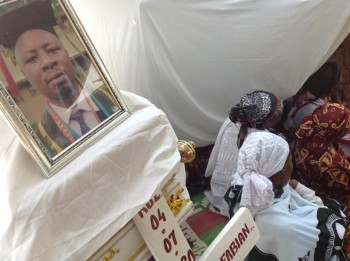 Edward Fabien died last week, overwhelmed with gastro-intestinal imbalance. He was 35. I went to his funeral yesterday, and cried a lot, though I never met him… Edward was born to the Ulluo tribe (which is more predominant in nearby Kenya). He grew up in the mountainous, remote valley where we attended the funeral….his mother was one of many wives. Edward, however, chose to become a devout Catholic, and moved his small family of four to Lamadi. He was the musical director in our church and in the schools. The children at our center loved him.

Edward did extraordinary things: he wrote a song especially for albino children and had his choir sing it in church, complete with choreography. 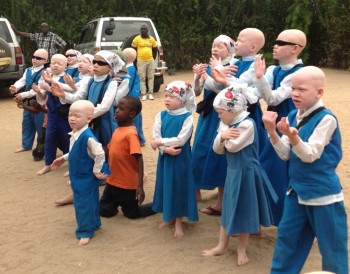 Our kids have learned the song, too, and sometimes perform it in public, to shocked audiences.

Some of the words are:…

Oh, why do you hunt us, and hack off our limbs…and try to steal our souls?…Aren’t we your children too, Mother Tanzania?

We hiked up into this mountain valley a couple miles, after spending the morning trying to get close to the path.. First, our car broke down, with Sister muttering …

Oh, with the children… in the middle of the jungle…

Then the next driver refused to continue after he got out us of the Serengheti preserve…Then the tire blew out on our commercial minivan. 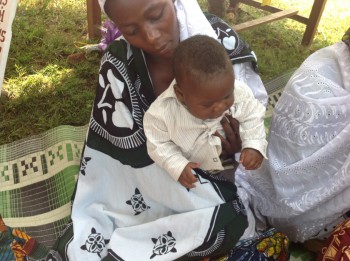 Edward’s wife and youngest child, who is three months old

Hakuna matata.
We’re not in Wisconsin any more. 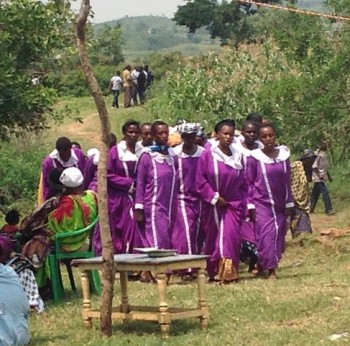 I was placed next to the casket, beside the family, in a position of honor … until the “mourners” showed up, and started wailing and howling over the casket. It was a little strange to me, because they were obviously putting on a show…e.g. pretending to wipe away tears that weren’t there. I could clearly see this, because I was just a few feet away. The only people actually crying, until the burial part of the ceremony, were the choir he had directed for years….and me. 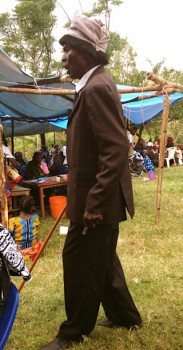 Several Ullua tribespeople who were kinfolk came to the funeral, among the seven or eight hundred present. I noticed how distasteful their practices were, to the Catholic majority. This man to the right, for instance, wandered around clapping and shouting, blowing a whistle and pounding the ground with his cane.

Sister Helena denied knowing the meaning of any of this. 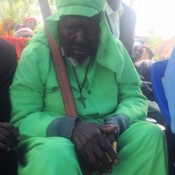 a priest from the Ullua tribe

After the compulsory meal that must be served to guests, and viewing of the body, we buried Edward in a cornfield. The Catholics demonstrated their determination to make it their funeral by piling the burial mound high. Ulua would have flattened it. 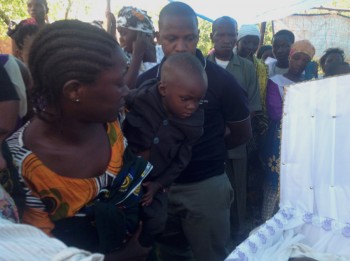 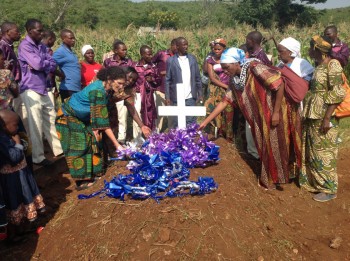 We were preparing to hike back to the road, after the burial, as the sun was sinking low. But someone asked Sister Helena to come and speak to the crowd.

She told me later:

I asked Edward’s spirit what to talk about…. and I asked God to guide my choice of words.

It’s apparently an Ullua custom to confiscate everything a widow owns, and perhaps even seize her home and sell it… in other words, women have no rights at all.

Sister Helena spoke passionately for about fifteen minutes, appealing to the community to save this young mother and her three small children from poverty and homelessness, begging them to bypass the Ullua tribal customs which Edward himself had transcended. She talked about how devoted Edward had been to his (one) family …. and appealed to the crowd to uphold his wishes. Several women praised Sister’s speech as we left, and said they supported her sentiments. We still don’t know the outcome of this drama, however. 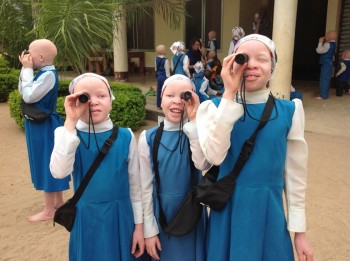 The next day, a group of international volunteers from StandingVoice.org called me and asked if they could come visit the kids. (Sister’s cellphone hardly ever works, which is another reason it took me five days to catch up with her when I first arrived in Tanzania… She would just rather feed the children, and tend to the babies than talk on the phone…).

A few hours later, Standing Voice was testing all the children for their vision. This group of volunteer opthamologists were from England, Spain and the United States.

Children with albinism often have vision approaching legal levels of blindness, and our children had never been checked out before. 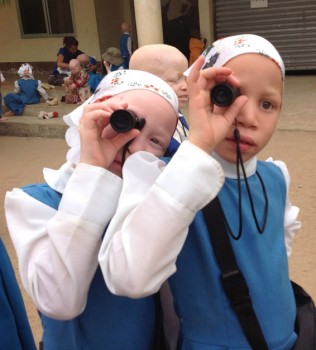 Having these optical aids will definitely “brighten” their lives and change their experience in school. Of course, the children stole the teams’ hearts away and the group plans to be back again in a couple of months.

This delightful American volunteer named Harry Freeland really bonded with Ibrahim and Robat, (which is easy to do!) and asked me to send him this photo.

Oh, here’s something I just discovered a minute ago, dear readers: 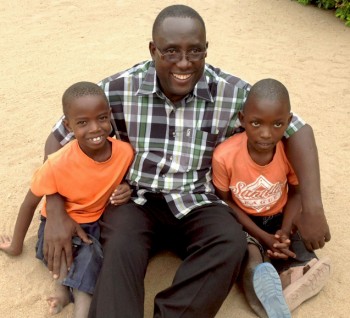 That “delightful American volunteer”, Harry Freeland, is the founder of Standing Voice, and made a famous movie in 2006 (which took him six years of filming) which has been hailed at film festivals all around the world, called “In the Shadow of the Sun” about the stigmas and dangers of albinism in Africa. 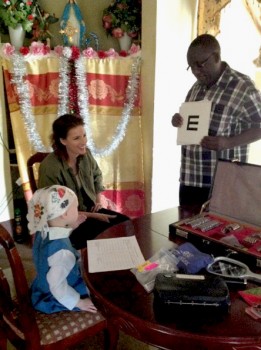 As “coincidence” would have it, I happen to be meeting with the star of that movie tomorrow, Josephat Torner. He is flying to Mwanza from Dar Es Salaam in the morning, to meet with me. We will travel back to Lamadi together.

Josephat was quite angry and surprised that the Prime Minister’s five million shillingi donation went to an imposter posing as someone who cares for albino children. He’s coming, “with the press,” he told me, to clear this up. Our relationship began when I wrote to several people, appealing for justice. 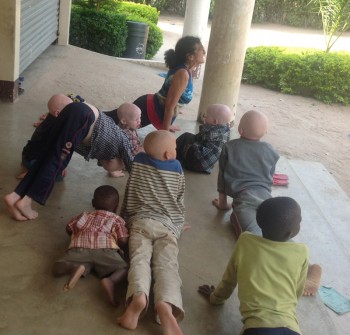 My yoga classes are a bit “frivolous” for Sister Helena’s taste, now that holidays are over… and the older girls are rarely allowed time off from their chores or studies to join me, but several of the younger boys are getting into it. 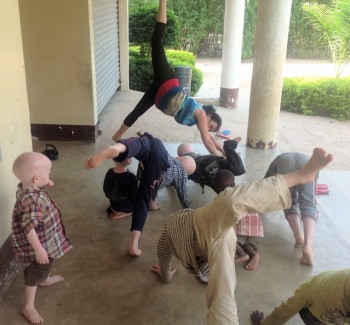 And, like the clapping games, Josea and Paul, two of the staff members, are definitely ready to run with it.

Finally, I want to mention the “prayer wall”. That is an institution I started around New Year’s. I asked everyone to make a picture and write their wishes and blessings for the coming year.

Mama Miriam wrote a wonderful prayer, hoping for good health for all the children and requesting more patience for herself…. 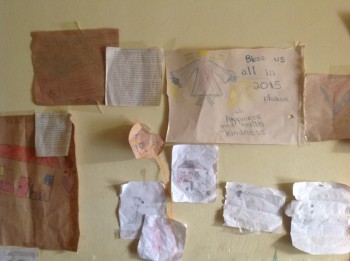 An art project is a good way to find out what is on kids’ minds, I’ve discovered: 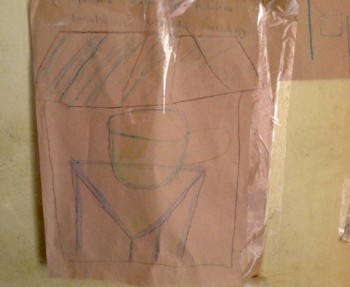 One of my daily mzungu customs is: When I come inside from my tent in the morning, I boil some water, sit at the fancy guest
table, and drink a cup of coffee every morning (Nestle’s powdered coffee, powdered milk, sugar, and sometimes even some cocoa powder). This is a luxury unimagineable to any of the children… 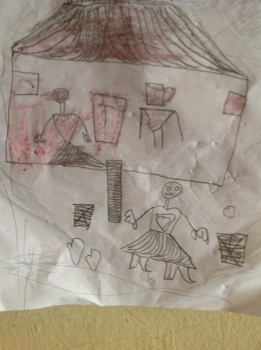 Everyone turns their heads as they walk by me, not seeing.

So it was amusing to see that every kids’ drawing included that cup of coffee somehow: 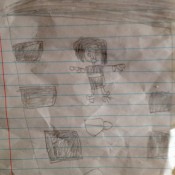 And Obama products seem to have beaten out even Che Guevara and Bob Marley, in terms of marketing popularity! 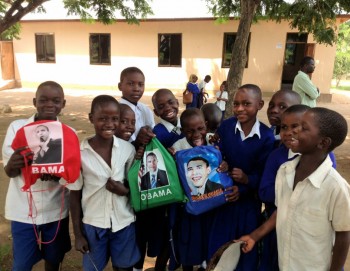