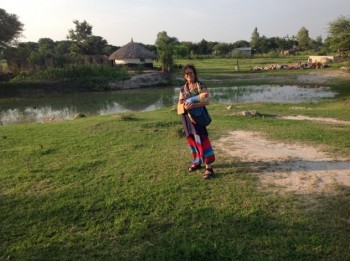 Joy and the chicken she was given for a
New Year’s gift by Sister Helena’s sister – click for larger view!

Actually, I can’t give you the full picture, friends.

On that motorcycle (below) was : Little Violet in front, the Motorcycle driver, then Sister Helena, then the chicken, then me….

We wound all over the mountainous hillsides on sandy tracks, avoiding the swampy rain-filled ditches, past bullock carts, goats and flocks of sheep, bicycles piled high with firewood… 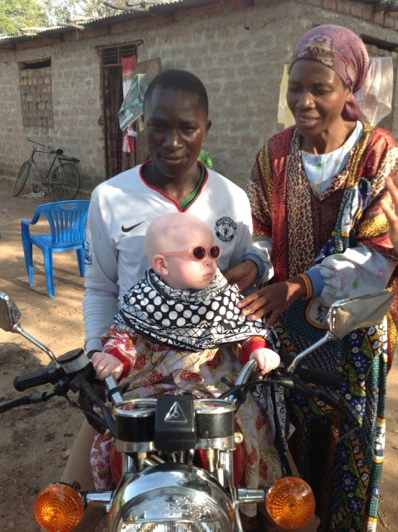 It was such a marvelous sunny breezy day! We spent it (many days, actually) visiting albino children who live WAY out back, delivering sunscreen, checking in, with Sister doing her own assessments….e.g. which children have parasites, which have been burned by the sun, which are malnourished…..

Sister Helena says that my presence in these homes of albino children seriously raises their prestige in the community. The parents are usually ridiculed, if not shunned. 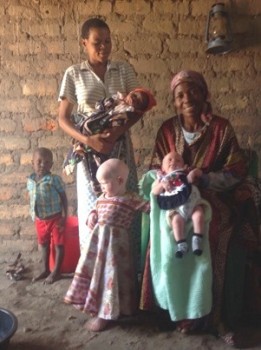 I was especially delighted to visit with this family, which is Violet’s original home. Vi is wearing a dress that her mama just made for her. She hadn’t been back home to visit in six months.

Meanwhile, Mama had given birth to twins, one albino girl and one black girl.

Mama impressed me with her grace and ease and the sense of “plenty,” in terms of resources (food, water, shelter, and happiness) in that home.

Violet’s ’s step-siblings, who live right next door with the other wife, were all vying to get little Violet’s attention. She pretty much ignored them, and seemed equally comfortable with me and with Sister Helena. But after a couple hours, her memories of “Mama” had clearly returned. 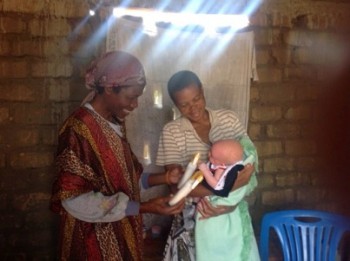 Before we left, Sister gave Mama some supplies that she would need to protect Perpetuella from the sun. Mama was amazed and delighted to see that little Vi was absolutely free of sores and burns from the harsh sun. Plans were made to bring little baby Perpetuella to the center when she’s about two, in eighteen months.

Mama suggested hopefully that Sister Helena should accept both twins, in order not to break them up? Many families in town are now trying to get their children into the center, because of our standard of living, education and possibilities for the future. Sister has to remain true to her government charter mission, however, and accept only albinos and/or those who are disabled or totally abandoned at an early age. Vi had an older albino sister, who, like Violet, was usually laughing and dancing. The sister contracted leukemia the second half of her life…and died at the Center at the age of four last year. Sister Helena is still grieving. 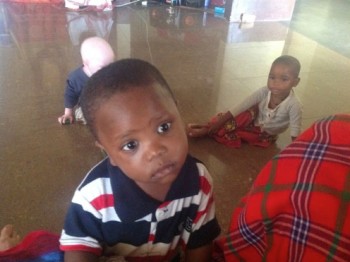 I asked Sister, “How old is Francisco?” last week.

A simple question like this usually reaps an incredible tale.

She replied that he’s about two years old now. He was discovered in an abandoned, locked house six months ago, in a distant province. He had scars from beatings, was severely malnourished and full of parasites. No one expected him to live….but the social worker in that province had heard of Sister Helena’s magic…and they begged her to take Francisco…whom Sister named, since they had no identification for him at all. 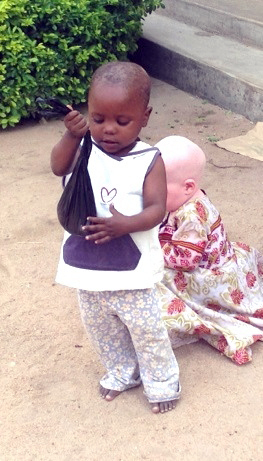 I’d noticed that Francisco had a pretty fierce temper, and was prone to chase anyone who messed with him all the way across the yard. But he spends most of his days healthy and happy and flourishing now. He’s playing soccer with amazing agility, and learning words like “banana”, and counting and dancing with me and the other kids. I just snapped this photo on the left a minute ago, to share with you.

There’s a shovel near the door of our home. Someone always seems to be burying something on the sandy grounds around the house. I assumed it was a massive composting operation until Sister mentioned that every aspect of an albino is considered fertile material for a witchcraft potion:

locks of hair, fingernail clippings, and even poop.

These items bring incredible profits to anyone that can take them to the witch doctor. Sister Helena’s younger sister (Mama Miriam) or the older girls are in charge of these careful grooming operations, because no one else can be trusted not to sell them.

Sister told me that one of her girls in boarding school was accosted and the front of her hair was clipped and sold.

I asked, “Sister, do you really believe in the power of this witch-craft to injure the child?”

Her response was unequivocal:

That child went blind for a week after her hair was stolen…I had to take her to the church for an exorcism. She got her sight back, but never again excelled in school. She used to be the top student.

I leave the “truth” of this to you, dear reader. I myself am chronically amazed at every society’s ability to manifest it’s own “dreamy” reality field….from my own suburban Semitic tribe in Chevy Chase, MD… to my fellow Qi Gong practitioners who manifest healing by transmitting energy…to the Sukuma power of witchcraft.

And perhaps the fabric of American society is also stained with a dark energy?
Why is diabetes now an epidemic? 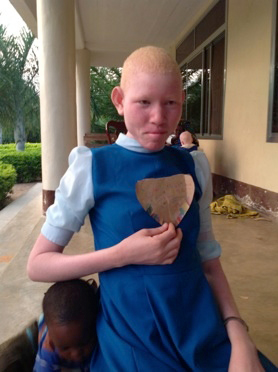 Perhaps we too are under the “evil spell” of high fructose corn syrup and factory farmed animals packed with antibiotics and chemicals? Social myths die hard, especially when the “Wizard of Oz “ is a darkly powerful industry.

My buddy Mariamu, at right, cut her hair right after this photo, cause it was getting too long.

Mariamu is twenty; she didn’t join Sister until a year ago, and didn’t start school until she was eleven. We go out shopping in town often, and we went to the church service last Sunday. Mariamu knows a lot of dances and songs, which I’m trying to learn.

I love you, Mama Joy.

Friends, I cannot say enough about the church choir. Perhaps just that tears of gratitude stream down my face regularly, when they are singing? I’ve made a dozen recordings, but think they’re too bulky to send. 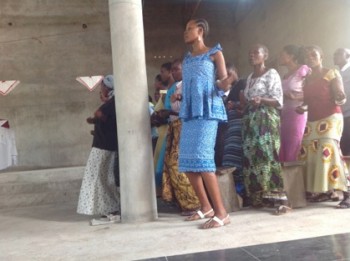 Everyone brings their own chairs to the Catholic Church. At the end of the service, here’s traditionally a competition to see which community has contributed the most charity.

Mariamu and I put our contributions into our neighborhood’s box…. and “we” came in at first place, for the first time in history (instead of the customary 8th or 9th) …because of the mzungu’s extraordinary generosity, it was explained to me.

The Protestant Church next door has more affluent members, Sister tells me….and
they have an amplification system. 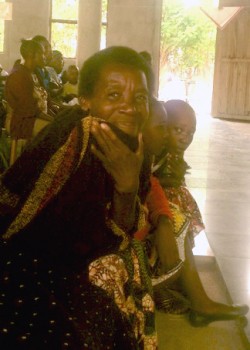 They drowned us out pretty often, except when our choir was going full tilt. I liked “our” music better.

Mama Anna was next to us in church. She’s a delightful neighbor whose emotional support has meant a lot to Sister Helena. Her English is quite good. She’s about my age, and English used to be the primary focus back when colonials were in power. Now it’s Kiswahili.

Friends, I’m going to close this Tales #3 with a few Christmas tales….

On the morning of December 22nd, Sister Helena and I headed out to the closest honest (i.e. nongovernment) hospital, in Mukula, with a very pregnant teen-ager named Hridaya. Sister was carrying a plastic bucket, in case the baby arrived before we got there. 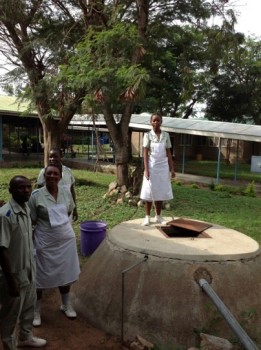 It was an exciting two-mile walk, then a crowded bus-ride for an hour, on a wash-board dirt road to get there.

The hospital staff was incredibly kind and competent, and did a marvelous job…especially considering there was no running water, and only intermittent electricity. 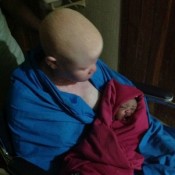 We were quite a sensation: a mzungu AND a pregnant albino teenager. This had never happened before.

I was showing Sister some photos of Wattle Hollow to pass the time, but we had to stop, because most of the hospital staff was there watching, in a few minutes. 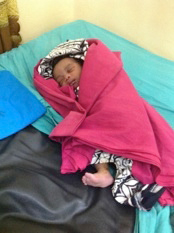 We returned home the next day, exhausted and happy.

The kids were quite thrilled with the newest arrival.

The next night, Christmas eve, Sister and I were sloshing around on the flooded village paths, looking for infant formula for Noella Joy. We had to travel to the next village for it.

Any adventure with Sister is fine with me. We sang “Jingle Bells” as we hiked in the dark. 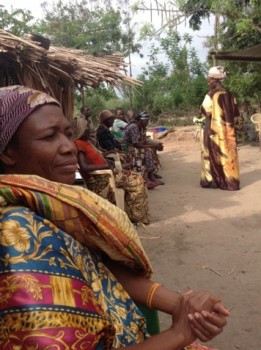 On Christmas afternoon, we all went out to a neighbor’s party.

When I asked Sister who all these people were, (the 30 or 40 folks gathered), she explained that our Sukumo host had many wives, and it was all his family. Oh.

There were just a couple of very drunk people dancing when we arrived. I must have been tapping my foot, because someone (less drunk) then asked me to dance. 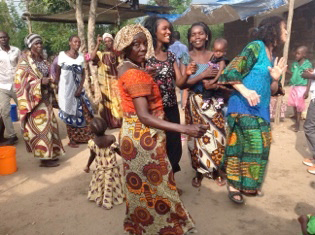 With Sister’s approval, I joined him, to a loud unanimous ullele chorus of approval by the women. Within minutes, the women joined me…

Then the kids got into it, too. We all had a great time. By the time I left, my status as a strange mzungu/foreigner had shifted to that of dada/sister. 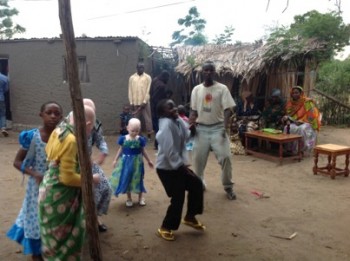 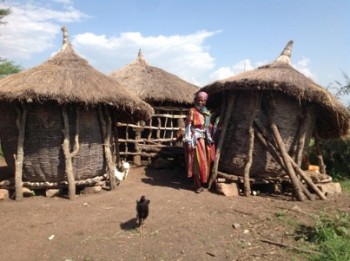 Oh, and those of you who know how much I love organic, natural structures, must know how thrilled and inspired I am by these stickwoven storage bins….or the round mud huts that I see all around me.

This man was working on his when I took the photo. I’ve shown some of my own mud-houses from Wattle Hollow to folks here, to large approval.

Ahhh, these easy holidays here at the center are about to end….Instead of thirteen or so kids, there will soon be thirty-two, starting in a few days.

But Sister Helena’s staff of helpers will also be back, too, she says. 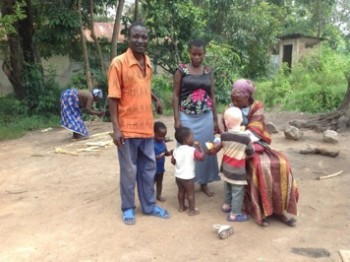 Here’s another family visit in the back country, by pikipiki – motorcycle