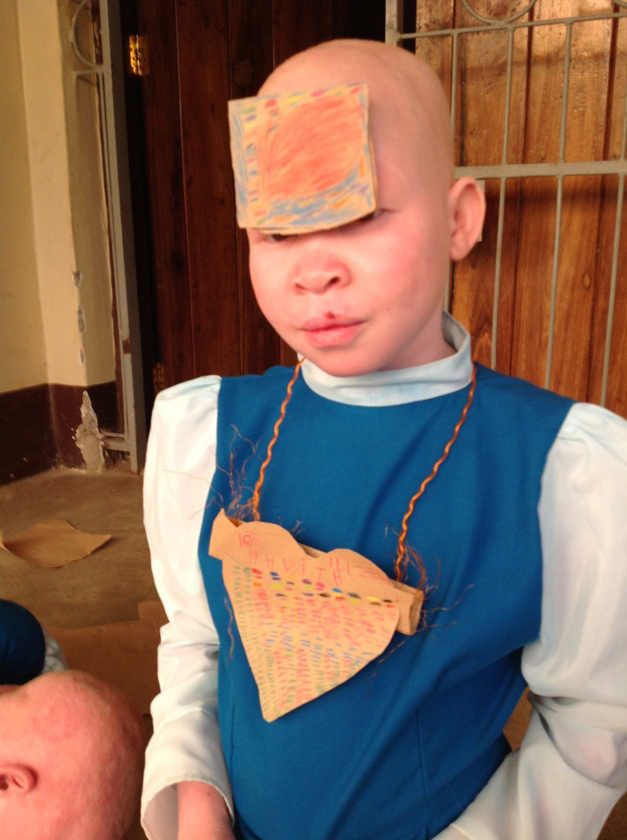 Some of the kids at Zeru Zeru refused to go home to their families for Christmas vacation and instead waited six days, through political strife, and floods, and communication and mechanical breakdowns, for Mama Joy to arrive. I received a rousing reception when I finally did, escorted by two of Sister Helena’s friends, on the bus.

We all did yoga first, by request.

Then I pulled out my craft supplies and suggested that we make
name tags…The children were quite innovative, more than I’ve ever seen in the Third World.

Sister Helena has made it clear to them that they are the ambassadors to African society and to the Sukumo tribespeople here, the emissaries who will prove that albino children (I use this phrase because Sister always does) are not ghosts or demons, but have superior capabilities and sensitivities. 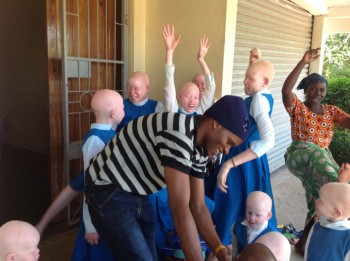 These are the first albino children around here to “come out” in public…. and not be hidden away inside their homes, for fear of being sold for their body parts. They are still shunned, in general.

Sister Helena told me that the danger is especially intense around election time….and that full-grown albino women were begging to come live with her recently. These witch-doctor contracts come from “very high up in the government”, she says…. because the politicians and police are looking for good luck. This is why the laws have not been enforced or strengthened. 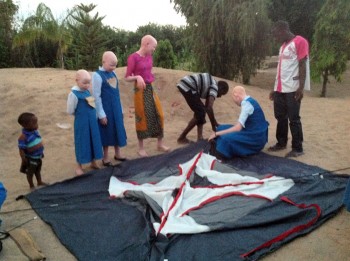 Though they’d never seen a tent before, the kids erected it within minutes.

This is my “nyumbani” where I sleep and meditate in the mornings, just outside the house. Ten babies generally make a lot of noise in the night, and I have taken sanctuary here….. I lead such a privileged life! 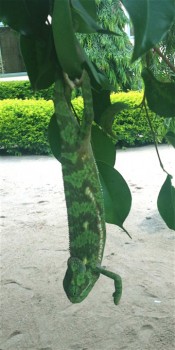 To the right is my closest neighbor….a 12” chameleon who has hung right there in the tree since I came. The only indication that he’s alive is that he changed colors and squirmed a bit when i got very close. At night he’s purely lime green.

Sister Helena is a phenomenon all by herself…a combination of saint, story-teller and comedienne. She told me:

“I never thought about anyone besides myself before I went to America. Then I saw the volunteers at Habitat For Humanity in Madison, and joined them. Something happened in my heart, and I felt happier than ever before in my life. I began to volunteer everywhere I could, in Madison and in Milwaukee. That was the beginning of my real path. I learned about giving from my friends in America and in Europe.” 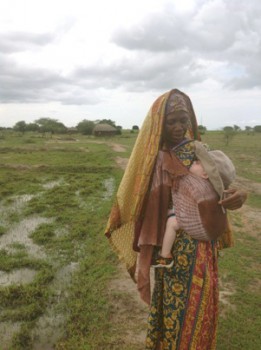 She spent eight years (2002 – 2010) in Wisconsin, and got a degree in Education. And yet, Sister is equally down to earth in her frequent description of herself as “an angry black woman.” Returning home, she found that she no longer fit in to the order of nuns that she’d been assigned to, in Bunda.

“There was so much favoritism, I just got angrier and my heart seized up.”

Then a European monk nearby named Brother Gregory had a vision in which Sister Helena would institute her own project and that she would be working very very hard.

“Brother Gregory promised to help me. And then he went and had a heart attack and died, right after I got started…..he just left me here alone. Jesus and Mother Mary used to come visit me and encourage me, too.. But they’ve all gone away now, on vacation somewhere…. I want to take a vacation, too!”

Sister frequently threatens to run away to Zanzibar and take a rest, “for a month, at least” now that Mama Joy is here. I suggested yesterday that she’d probably last about a day, before wondering, “Where is everybody?” She smiled and nodded.

These children, who have been betrayed by their tribal origins in so many ways, are incredibly devout Catholics. They say a twenty minute prayer before every meal…partly in English. And several times a week, they volunteer to circumambulate around the house at dusk, chanting in Latin, Swahili and English, doing a forty-minute liturgy that ends with elaborately pantomimed
gestures, choreographed by Sister Helena. 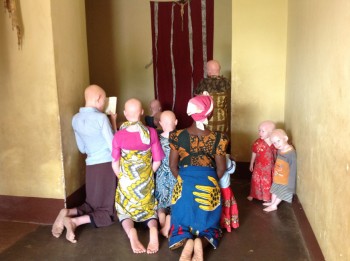 Shockingly, even the five, six and eight-year-olds do it from memory! Sister shakes her head and swears that she can’t remember it all. She has taken these kids to mass in the Cathedrals in Bunda and in Musoma, on Easter, and allowed them to recite the liturgy in front of hundreds of parishioners, with all the gestures…no need for a microphone or text. She said the bishop and most of the audience were in tears of amazement by the end.

Sister no longer allows the “photo shoots” with the children that she used to. Too many groups have posted the photos on their own websites and pocketed donations from abroad. A Methodist Bishop (from Fayetteville, AR!) who has been here for decades was one of these exploitive con men. He always feels “too sick” or too busy when Sister requests an audience. But he did finally take the photos off his blog. I’m pretty sure he’d be too sick to visit with me, as well.

Another Sukumo tribal tradition is to slaughter or burn elderly women who live alone, in case they are witches. My friend Sudi, a wonderful young engineering wood, and their eyes become red with irritation. This is sufficient cause for their elimination. 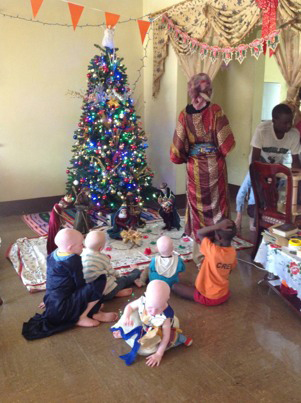 It never happens to elderly single men who cook with wood, though.

The Church has banned all such witch-craft practices, and is fairly widespread around Tanzania. I’ve never felt such respect for the Christian religion as a true sanctuary before.

Sister doesn’t accept exclusively albino children here at the center. In the photo below (on the right,) you’ll see little baby Marcelina whose mother died in childbirth, and my good buddy and “mualimu” (teacher) Ibrahim. As you can see below, Ibrahim has one and a half legs. Yet he has learned to sort of scamper, and can move faster than anyone else around. At seven, he is one of the top ten students in the local primary school, all of whom live with Sister Helena. Ibrahim recently won a speech contest within the precinct. When he went home for vacation last week, he insisted on arriving in his village, on a motorcycle with me, and Sister Helena on the other one. Everyone in the tiny village got to see how important he was. I loved it! 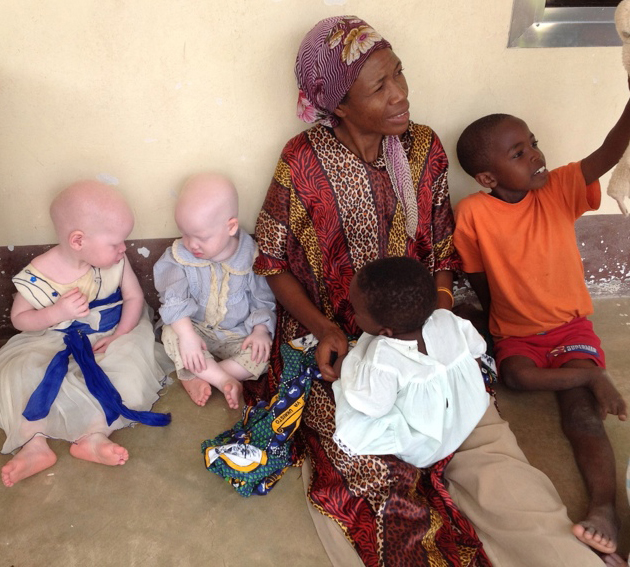 Marcelina and Ibrahim (on right)

There is a story behind every one of these children and Sister’s heroic response to their
emergencies.

But I’ve probably given you enough information to digest, for one letter.

When the kids and I went to visit some delightful neighbors across the village, we all held hands and did a kind of Harpo Marx walking, while singing a wonderful song about wonderful Mother Mary. 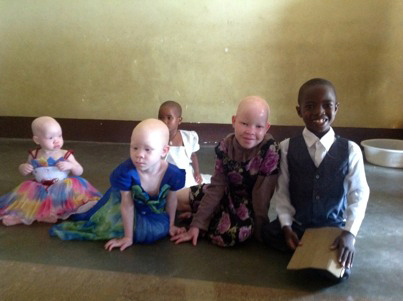 May your new year bring you the blessings of peace and wisdom, friends.