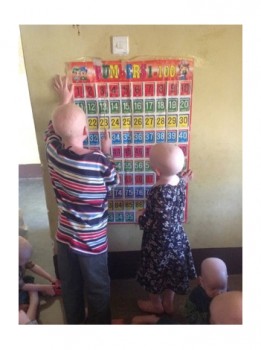 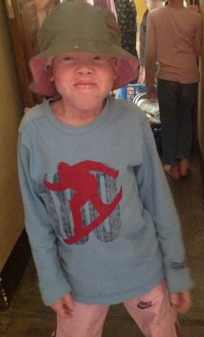 Remember Beheveh, who ran away from his schoolwork in the last Tales? He has spent many hours here, in front of the the numbers chart, reciting…. early morning, afternoon, and evening, with someone to monitor, assist and support him.

Some evenings, Sister Helena will collect pens or plastic bottles, and he will count those instead, to make the numbers three dimensional.

Beheveh can now count to twenty.

The first time he did it, without help…..the kids intoned one of their favorite chants:

All of us cheered loudly, every time Beheveh completed the count. 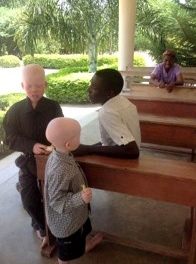 There are two days a month when the parents come to visit their children, and to offer bags of beans or rice or dried sardines to the Center. It was a defining moment when Beheveh’s dad came to visit, on Saturday. Beheveh showed Dad his school work, and counted to twenty, three times.

He and Zachariah are holding chunks of sugar cane, a reward which Sister sometimes offers.

Zachariah is enjoying his role as #1 coach to Beheveh. It was he who stood by Beheveh throughout one difficult evening, and insisted:

Don’t even sit down, until you learn those numbers!

As his dad was leaving, Sister overheard Beheveh saying,

Go home and tell them that I am really reading now. 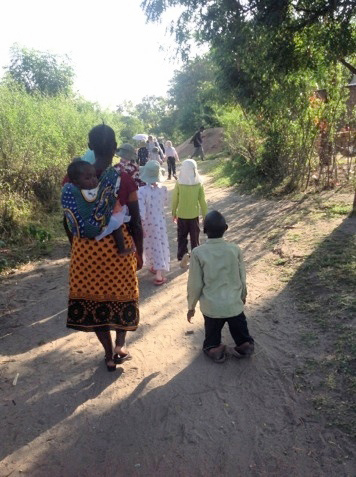 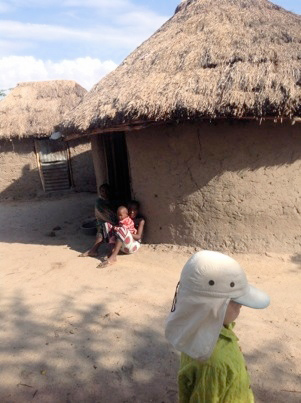 On Sunday, Mama Miriam and I took half the group to the Anglican church. This was a special treat, because the kids can not go out on excursions now, aside from the two holiday periods per year, without a permit from the police.

Townspeople still seem dumbfounded to watch us walk by, especially when we are miles from the Center.

I like to throw out a phrase or two from the Sukuma dialect, which makes us all giggle ….and compounds the mzungu/albino phenomenon. 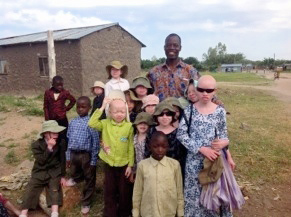 It was a happy reunion with the Anglican pastor, Reverend Jackson, who was their public school teacher, years ago. And the Reverend was thrilled to hear my story about how I happened to be living in Lamadi.

It will be next week’s sermon,

I was slightly delighted, I admit, to note that the children were pretty squirmy during the church service. ..so I’m not the only one who fails to capture their attention. Sister Helena holds the magic wand. 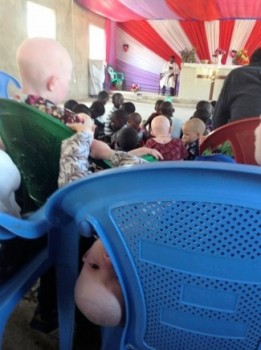 On the right, Zawadhi is practicing dhanurasa (bow pose) in her chair.

Khadijah passed the time much more sedately, following along in the prayer book… except that she was holding it upside down the first half of the service. 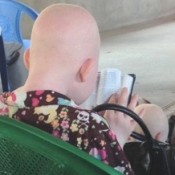 And I loved watching the choir perform, karaoke-style, and do elaborately orchestrated gestures while they sang.

Mama Miriam and I are practicing those moves now, when she can snatch a few minutes between chores.

Much smaller and newer than the Catholic Church congregation, I enjoyed the personal interaction at this service. Many came over to greet me, and everyone shakes hands with everyone else after the service. 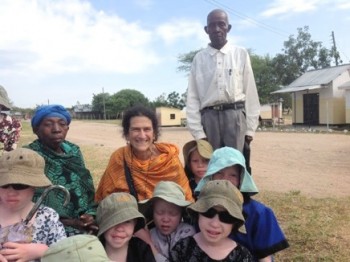 Mama Miriam gave public thanks for the children and for Mama Joy…. I made a short (and, no doubt, grammatically incorrect) speech.

Beheveh got up and announced that he is able to count now. and gave thanks to God. 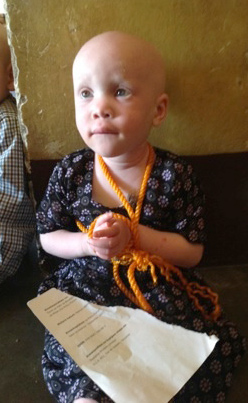 That afternoon, little Mariana (as she is now nicknamed, due to a surfeit of Maria’s) was caught, red-handed, tearing up and eating a book. Sister Helena responded by tying her up, for a few minutes. Mariana loved it.

Sister has a fascinating and seemingly random repertoire of stern and playful responses, which keeps us all alert. 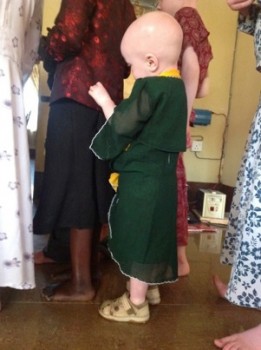 And why is little Mariana wearing shoes during morning prayer, when the household rule is:

The night before, Sister Helena pulled out a big bag of gently used shoes, sent by a bank manager in Mwanza.

Ten pairs of (velcro!) fastened shoes were assigned, among the thirty children.

I wish I had photos of this event, but the electricity went out right then, so it all happened in twilight shadows.

The ten delighted children with newish shoes started marching around in circles, goose-stepping and hopping and singing, with their arms raised heavenward.

It’s not unusual for children to act happy with their new possessions. But then, the other children began singing to them and seemed equally joyful about their comrades’ new acquisitions. That’s pretty wonderful, to me….not one sulky face in the crowd. The singing went on for hours, and then evolved into a spelling bee, until late at night.

At least twice daily, these children intone the “Last Judgement” passage from the Book of Matthew (in English!) from memory:

Jesus is suggesting that we love and obey Him by serving others, who are also Him, in some form….

One of the ironies of my time here is that I had thought I was going to teach compassion, forgiveness, and sympathetic joy (as it’s called in Buddhist studies) to the children. Instead, they are teaching me…. about grace. 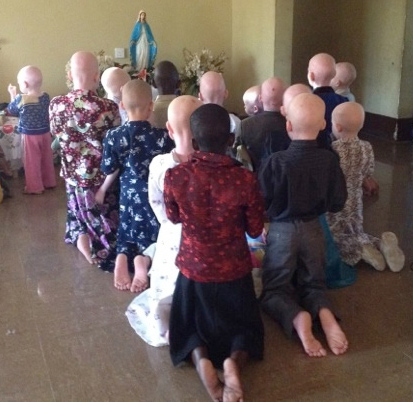 At left is little Daniel, who is almost one year old. He’s one of several infants who have come here (or Sister visits them) to get lotion and become familiar with the Center.

When he’s two, Daniel will move in, as so many of our kids have done.

And, to continue with our (serialized) saga about the politicians who post photos of our children online and are collecting lots of money for their own contrived “Mother Thereza Center for Albino Children”…. we went to inspect the purported center, and found it was very real indeed….although stalled in process, apparently.

I am not so reactive anymore, after a few months here. Collecting funds and pretending to support albino children is quite common all across the country, I’ve since discovered… If we make too much fuss, they might shut us down, in revenge and to cloud the issues. 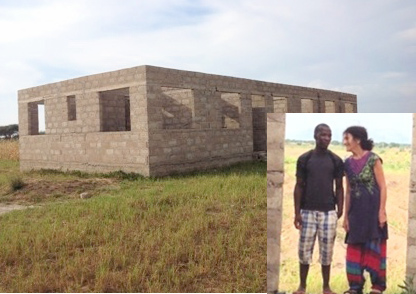 Joy and Paul, at the almost-finished “Mother Thereza Center”

Of course, now that the Tea Party has a majority in U.S. Congress, who knows what deceit and trickery our own politicians will manifest, with self-righteous pomp? … How could Edward Snowden win the Nobel Peace Prize and also be “wanted” by the law?

I continue to (try and) teach the toddlers most mornings….and there is, perhaps, some incremental improvement. Instead of throwing up my hands and huffing off when the kids completely “break out” of control, I now save face by handing out colored pencils and papers, before I slink away.

I’ve initiated a water-color project with the older children, which we’ve all loved. I take four or five kids at a time and we retreat to a shady, sandy area outside. We relax and play with shapes and colors. The kids are thrilled to see their work on the wall.

And, upon closer inspection of the “nyumbani pinki” (pink house)….I see that the wall mysteriously dissolves… to reveal the dining table where I drink my “forbidden cup of coffee” every morning, that no one is ever allowed to look at, as they walk by.

I go to the big city of Mwanza, every week now, to obtain wifi access to send these Tales, and to apply and send off grant applications for the Center.

These journeys help me measure my progress with Kiswahili, and the culture in general. I now delight in the small winding alleys of the market-place, in my exchanges with the vendors.. When I climb off a pikipiki (motorcycle) and arrive at the Busuruga bus station, everyone seems to know where I’m headed…the pineapple vendors come over and give me the best deal, the water vendors know I want a bottle of water… If someone is pushy or yelling, I can say (in Kiswahili),

That ends it, immediately. No one yells “Hey, mzungu!” anymore….partially because I’m wearing strange outfits that I sewed from a traditional kanga, with a proper shawl over it all.

But when two young men made a lewd comment at the bus station last month, I responded slowly and sternly, in Kiswahili,

Wouldn’t it be better to say “shikamoo” (a term of respect for elders)?

I love to take my “Happy Walks” in Mwanza, which is to go nowhere in particular, looking and seeing and smelling, and blessing everyone as if they are or once were my mother….. Something wonderful always happens. 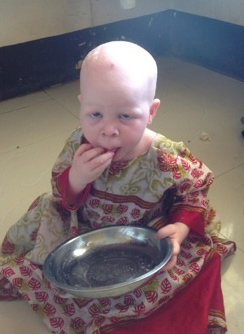 There is a famous monk in northern Thailand, named Ajahn Jumnian. He is renowned for his happiness, and the way he broadcasts this energy. I feel the same way about a little girl here, named Violet…We have incredible exchanges every day, just making sounds back and forth. Vi seems to have an extra supply of “happy chemicals” stored in her endocrines/brain….she starts giggling and twirling, smiling … anytime.

If my memory serves me, Violet even resembles Ajahn Jumnian quite a bit! 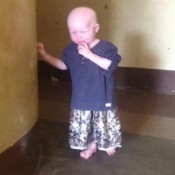 However, every time I pick up my I-pad to record this phenomenon, either the picture is blurred, or Violet becomes somber and wanders away. 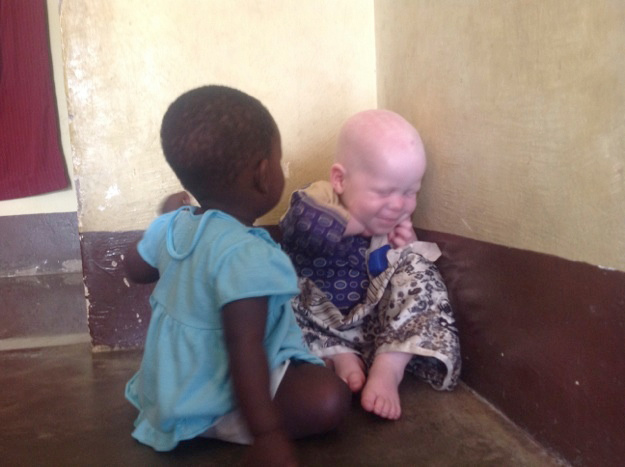 Even while little Maria is grabbing for Violet’s toy, Vi is
smiling….

I’ll be heading home to America, in about two weeks now. I’m wanting to concentrate my energy, and my focus …to send special love to each child, and to be more useful to Sister Helena. I want to improve my Kiswahili so I can understand the children’s many songs and what they’re asking me…. 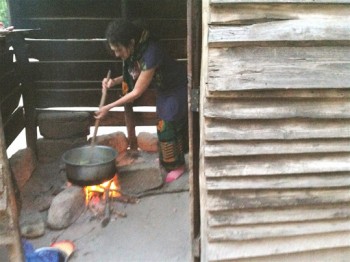 I’ve begun the practice of expanding the word “Yoga” with my buddies Josiah, Mama Miriam and Paul, the wonderful staff here.

For instance, Mama Miriam is teaching me “Ugalli Yoga”. She is showing me how to make five gallons (!) of polenta, in a giant pot over a hot smoky fire…We are fortunate enough to buy the firewood, instead of the girls or women who walk miles to find it somewhere…. in Afghanistan, there are also explosive hidden landmines waiting there…

So, the first time we made ugalli together, I “got it”:

This is practice in aversion –

*I burnt my ankle with a flying ember.
*My eyes watered from the smoke.
* the heat was extreme, in the little wooden hut, with a big fire
* I knocked the huge pot off the cooking rocks, as I stirred the polenta
* There is a special way of twisting one’s arms to stir the polenta with the yard-long wooden spoon, so it won’t burn, and to smoothing out the lumps.
* African women I’ve seen seem to have their own version of “Firewalking” on hot coals, that we do in America. It is: picking up a metal pot of boiling liquid with their bare hands, off the firepit. I still lack faith, at this point.

…..all the while the smoke was pouring into my eyes and lungs..

Mama Miriam and her daughter Monica laugh a lot, while I stir and fuss.

My studies continue, in this and many other subjects (i.e. pulling water from the well in a bucket…”Water Yoga”…and we’re lucky enough to have a well. I see village children scooping brown water from a small hole in the sand with a cup, cause their family cannot afford to use the village well.) 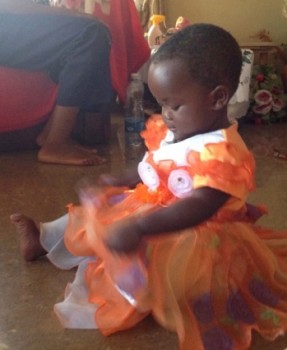 Here is Baby Marcelina, in her new birthday dress. She turned one last week. Marcelina’s been here since she was two days old. Her mother died in childbirth.

She certainly has a blessed existence, as she is universally adored and attended by everyone. She is also the 24/7 entertainment channel for the kids and staff. It’s been amazing to see her change so much, in the three months I’ve been here. She’s starting to walk, to eat everything, to talk and to expand her social circle to include me and others.